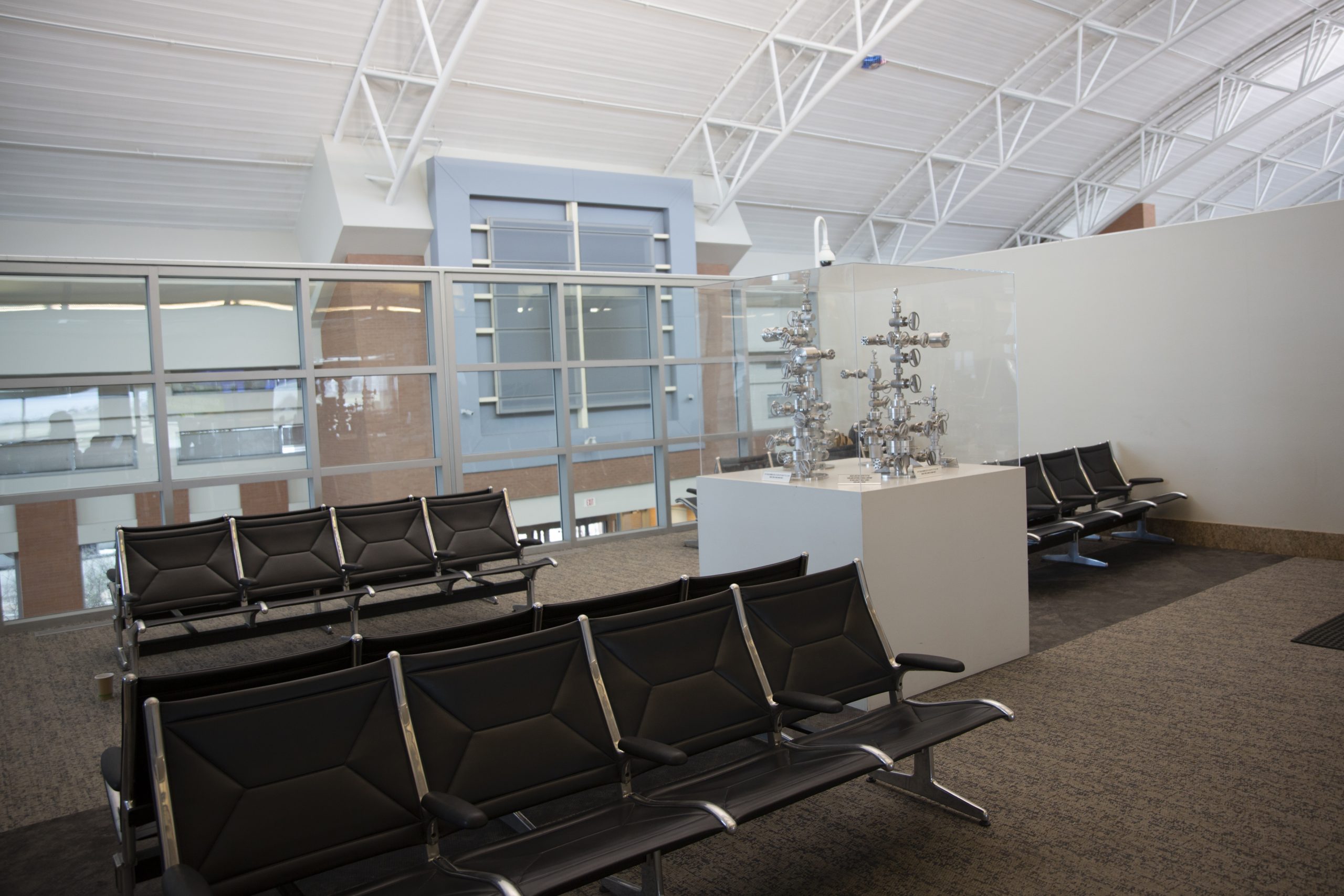 MIDLAND Basin PBS is creating a lounge that is likely the first of its kind at the Midland International Air and Space Port. The target opening time is January 2023.

The lounge will be across from the Southwest Airlines gates.

There will be a big couch for parents to sit on, an iPad table that will feature only PBS Kids and PBS Learning Media, Wolf and Alyson Trevino, who does public relations for the station, said.

Wolf said it will include PBS Kids videos with Daniel Tiger and Pinkalicious and PBS Kids games.

“There’s four of those. It’s restricted to that access only, so that’s all they’ll be able to get into. It’s going to have a big giant TV that will play PBS Kids 24/7 on it. We’ve got a free little library where kids can take a book to take on the plane. They don’t have to return it,” Wolf said.

Trevino said there will be a reading nook and a “huge, cute bookshelf to house it in.”

Wolf added that there will be a busy board shaped like an airplane mounted on the wall.

“There are five panels on it, I believe, and at least one activity on each one,” Trevino said.

There will be a clock where children can change the time.

“There are pieces that they can move around and a little maze area and beads on a wire and things like that, so it’s an active place for kids to go and play,” she added.

Wolf said the area will be for prekindergarten to third grade, but they are going to put in some chapter books for older children to take.

Wolf and Trevino said the area will be decorated in PBS blue and green and have Daniel Tiger chairs.

“You’ll definitely know where you are,” Trevino said.

It’s a roughly 209 inch by 180 inch space and Basin PBS has a five-year contract with the airport.

PBS Kids is a huge part of families’ lives.

“I think all kids from even my age and yours with Mr. Rogers, with Sesame Street, with School of Rock, throughout the years PBS Kids has really been instrumental in developing children’s minds, especially socially-emotionally. It’s wonderful that we can now take this to the (Midland International Air and Space Port) to just give those kids the experience of what PBS Kids is all about,” Wolf said.

Wolf noted that Colgate Energy helped out a great deal.

“With this comes a ton of hard costs. We have to buy all the furniture and all the books. We have to make sure everything’s industrial strength because of the wear and tear, and the airport charges for space,” Wolf said. “So without (Colgate Energy), we wouldn’t have been able to do this and their commitment to kids in our area is pretty overwhelming.”

The concept came about around a year and a half ago when they were talking about ideas.

“We were like how can we be out there and not just be a board? And there’s nothing for kids, so it was sort of that hey, wouldn’t it be neat moment,” Trevino said.

Wolf said they have been working on the project for about a year. She added that she didn’t want to announce it until they got funding and had a ballpark timeline established.

They had to get contracts and permissions from Fred Rogers Productions, for example. Trevino said they are working on some other permissions, as well. Supply chains also have been an issue.

The furniture is being built, but the books and Busy Board are in. The books will be replenished once a week and the lounge will be cleaned regularly.

Trevino said the lounge will be a safe place where they can rest, wait and relax.

Wolf said it will also keep children out of harm’s way.

PBS executives expect the lounge to attract about 70 percent of the airport traffic.

“It’s also kind of a joy that a kid can go get a book and take it on the plane and keep it,” Wolf said.

Trevino said it will also keep children busy and it takes PBS Kids and Basin PBS across the state and nation.

“The median age in Midland now is 34 … So there are lots of kids that are coming in and living here and this … introduces them to who we are,” Wolf said.

In the four years she has been with Basin PBS, Wolf said this is probably the project she is most proud of not only at Basin PBS, but in her career.

“Because it’s lasting and it’s going to make a difference in people’s lives — even if it’s a small difference; even if it alleviates a little stress at the airport. That’s a big deal. Kids are hard,” Wolf said.

Johnna Pullig, the new education director at Basin PBS, has been on the job about four months.

“I grew up out here in the Permian Basin area. I’m from Big Lake, so I’ve been in and out of Midland my whole life. I was a teacher and a coach, taught eighth-grade social studies and coached all the junior high sports,” Pullig said.

She was in Big Lake for about three years and was going to be moving to Midland.

“This job was available and so I applied and here I am,” Pullig said. “I’m really excited about all of the things that PBS has to offer and the growth that’s happening here. There’s a lot going on at PBS, and especially the station has a lot going on all the time.”

“We’ve gotten to do a back to school festival for the kids. We’re working on an intercession camp in a couple of weeks. We’ll be having it at DeZavala (Elementary in Midland). It’s never a dull moment; it’s happening. In between all of that we’ve got the airport project and getting to know the community a little bit better.”